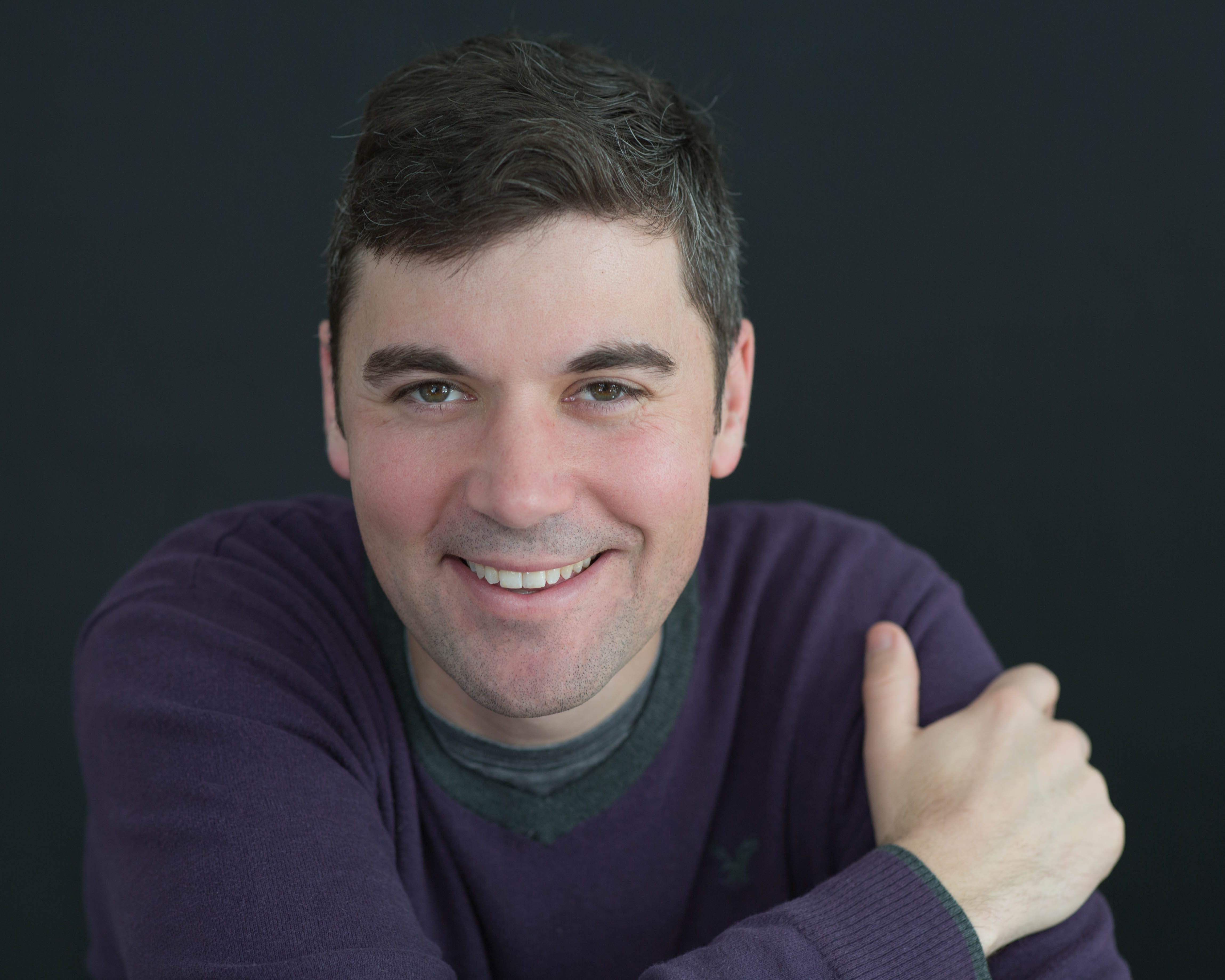 One of the highlights of our season was the visit by Eli Saslow to the UCSB campus.  Not only was Eli an excellent public speaker he was also very enthusiastic and fully engaged in going above and beyond to deliver for our students and the community…[A]mazing and heroic!

Eli was wonderful! The Orpheum event was incredible—the students were engaged and interested, and they asked phenomenal questions. And the Benefit dinner was a record-breaking event, with almost $500,000 raised towards our work. Eli was warm, personable, and informative—he left people wanting more, which is always the best way.

— Director, Facing History and Ourselves

No one can match Eli Saslow’s skill at telling the most improbable, humane, and riveting tales of our time.

— Jane Mayer, author of The Dark Side and Dark Money

One of America’s premier narrative-driven journalists. No matter his subject, he writes in a way that makes a reader feel they are witnessing everyday life in the context of something greater happening in our society.

— The Nieman Foundation for Journalism at Harvard

The story of Derek Black is the human being at his gutsy, self-reflecting, revolutionary best, told by one of America’s best storytellers at his very best. Rising Out of Hatred proclaims if the successor to the white nationalist movement can forsake his ideological upbringing, can rebirth himself in antiracism, then we can too no matter the personal cost. This book is an inspiration.

— Ibram X. Kendi, National Book Award-winning author of Stamped from the Beginning: The Definitive History of Racist Ideas in America

One of Eli Saslow’s signature gifts as a storyteller is his extraordinary knack for simply being there as people navigate some of life’s most harrowing crucibles—opioid addiction, grinding poverty and early death, to name a few of the issues his deeply reported narratives for The Washington Post have explored.

Saslow humanizes big issues by embedding himself in characters’ lives, which allows him opportunity to observe the kinds of details that make for deeply personal, and moving, stories. His work always feels like it’s about the work, nothing more… He is building an impressive body of work with calm, fluid authenticity.

Eli Saslow, one of the great young journalists in America, has found his way around the cynicism and superficiality of Washington politics to show the profound real-life connections between the White House and the people.

This is essential reading for our political moment. Eli Saslow is among the best nonfiction writers working today…This is a story about the long struggle of America’s racist history told through the battle over a single American soul.

In his Pulitzer Prize-winning coverage for The Washington Post, Eli Saslow, who has been called “one of the great young journalists in America,” reveals the human stories behind the most divisive issues of our time. From racism and poverty to addiction and school shootings, Saslow’s work uncovers the manifold impacts of major national issues on individuals and families.

Saslow won the 2014 Pulitzer Prize in Explanatory Reporting for a yearlong series of stories about food stamps and hunger in the United States. Collected into the book American Hunger, his stories were praised as “unsettling and nuanced…forcing readers to grapple with issues of poverty and dependency.” Saslow was also a three-time finalist for the Pulitzer Prize in Feature Writing. “The Lonely Quiet,” Saslow’s intimate, devastating portrait of parents whose first-grader was murdered at Sandy Hook in 2012, explores both staggering loss and the determination to wrest something meaningful from that loss. In 2016’s “How’s Amanda?“, he profiled a mother trying to support her adult daughter’s recovery from opioid addiction; he co-wrote the script for the upcoming film adaptation, Four Good Days, starring Glenn Close and Mila Kunis. And in his feature “The White Flight of Derek Black,” Saslow told millions of Americans a story we need to hear: how the one-time heir to America’s white nationalist movement came to question the ideology he helped spread.

Derek Black might be termed white nationalist royalty. His father, Don Black, launched Stormfront, the first major white supremacist website; his mother was once married to former KKK Grand Wizard David Duke, who was Derek’s godfather and mentor from birth. Derek was an elected politician at 19, with his own daily radio show on which he urged white nationalists to “infiltrate” the American political system to prevent what he termed “white genocide.” But when Derek chose to attend a tiny liberal arts college, his ideological foundations began to crack. Saslow’s book Rising Out of Hatred charts the rise of white nationalism through the experiences of one person who abandoned everything he was taught to believe.

By 2016, white nationalism had become a glaring presence in the political mainstream, and Derek was ready to confront the damage he had done. Built on extensive, wide-ranging interviews with Derek, his father Don Black, and many other people, Rising Out of Hatred traces Derek’s painful but ultimately profound evolution, and explores the enormous ramifications of his decision to publicly denounce white nationalism in an open letter to the Southern Poverty Law Center in 2013.

“This is a beautiful and important book. I am a changed person for having read it. If my father were still alive, there would be no book I’d rather discuss with him than this. There are gorgeous, brilliant souls at work in this powerfully told story, and they are everything that’s right and promising about our future.”

A testament to the power of education to broaden minds and spark conversations, Rising Out of Hatred immerses us in Derek’s world—as challenging, even uncomfortable, as we might find that—and creates, in the words of the Nieman Foundation for Journalism at Harvard, “a relationship between reader and story.” At once political and intensely personal, Rising explains how our nation arrived at this polarizing moment, and suggests that outspoken communication and active listening have the power to change lives. Yale law professor Amy Chua called Rising Out of Hatred “a must-read for anyone interested in understanding and overcoming hate.”

“This is a double portrait: of a worse America, and of a better one. Neither of them has yet come to pass, but each of them might. Thanks to reporting that is both truthful and humane, we see in one young man’s decision a guide to the choices that face a generation and a country.”

—Timothy Snyder, New York Times bestselling author of On Tyranny and The Road to Unfreedom

Saslow’s first book is also concerned with untold American stories and the complex ways we understand our leaders. Ten Letters: The Stories Americans Tell Their President, grew out of Saslow’s fascination with President Obama’s daily habit of reading ten letters he had received from Americans. By turns angry, optimistic, and moving, these letters—addressed from “Dear Mr. President” to “Dear Jackass” —serve as Saslow’s lens through which to understand who we are as Americans. David Maraniss, who has written biographies of both Obama and Bill Clinton, calls Ten Letters “a luminous book.”

Saslow is a longtime staff writer for The Washington Post, where he was initially a sportswriter. He covered the 2008 presidential campaign as well as President Obama’s life in the White House. Four of his stories have been anthologized in Best American Sportswriting, and he is an occasional contributor to ESPN The Magazine.

Saslow’s in-depth reporting covers the impact of some of the most pressing national issues and policy decisions on individual lives. His ongoing oral history project for The Washington Post, Voices from the Pandemic, collects the accounts of ordinary people touched by COVID-19. From a coroner in rural Georgia, to the widower of the first casualty in Indiana, to a nurse in a besieged Detroit hospital, Voices from the Pandemic documents a country struggling in the midst of a worldwide epidemic. Saslow is at work on compiling these accounts into a book of the same name, slated for publication in 2021.

Saslow speaks on the role of journalism in highlighting social and public health issues, the craft of longform journalism, the human impacts of public policy, and the importance of civility and radical inclusion. He was the T. Anthony Pollner Distinguished Professor of Journalism at the University of Montana, and he has spoken at Princeton, Syracuse University, UNC Wilmington, UVA, Northwestern, USC, and elsewhere. In 2011, Saslow cofounded Press Pass Mentors, a writing-focused nonprofit for underrepresented high school students in the Washington, DC area

A graduate of Syracuse University, Saslow is the winner of a George Polk Award, a PEN Literary Award, a James Beard Award, and other honors. He lives in Portland, Oregon, with his wife and children.

For more information on Eli Saslow, please visit him on Twitter and at www.elisaslow.com, or explore his page on The Washington Post. 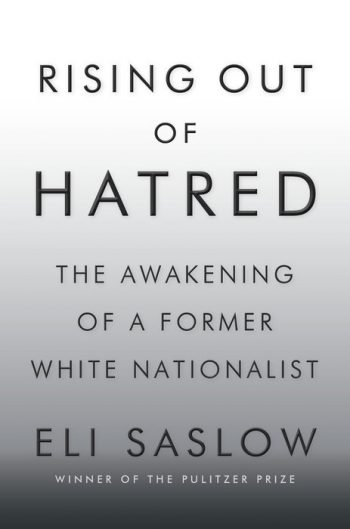 Praise for Rising Out of Hatred

A disturbing look at the spread of that extremism — and how it is planted and cultivated in the fertile soil of American bigotry. And yet, Saslow’s vivid storytelling also conveys that during this period of deepening racial division, there is the possibility of redemption. 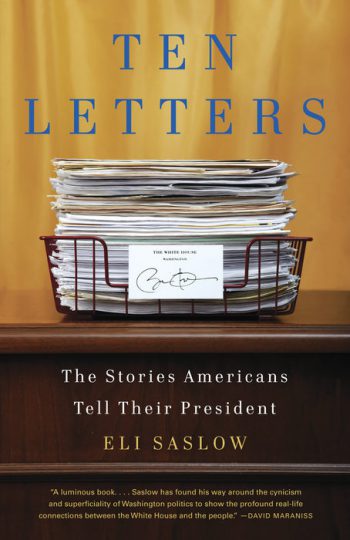 Praise for Ten Letters: The Stories Americans Tell Their President

In this testament to the power of the written word, the country’s most vexing challenges, from immigration to education, healthcare to housing, are seen through the eyes of both persons directly affected by them and one person uniquely positioned to do something about them. 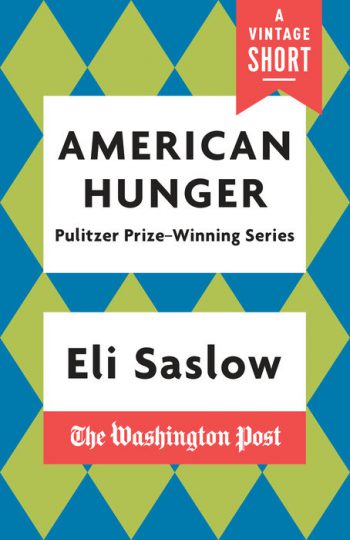 Unsettling and nuanced reporting on the prevalence of food stamps in post-recession America, forcing readers to grapple with issues of poverty and dependency.

The Pulitzer Prize Board

Praise for Rising Out of Hatred

A disturbing look at the spread of that extremism — and how it is planted and cultivated in the fertile soil of American bigotry. And yet, Saslow’s vivid storytelling also conveys that during this period of deepening racial division, there is the possibility of redemption.

Praise for Ten Letters: The Stories Americans Tell Their President

In this testament to the power of the written word, the country’s most vexing challenges, from immigration to education, healthcare to housing, are seen through the eyes of both persons directly affected by them and one person uniquely positioned to do something about them.

Unsettling and nuanced reporting on the prevalence of food stamps in post-recession America, forcing readers to grapple with issues of poverty and dependency.

The Pulitzer Prize Board

Eli Saslow and Derek Black on Today with Megyn Kelly